A network can represent assertions of biological relationships that are the results of experimental, analytic, or curation processes. Networks may in turn serve as inputs to further processes of analysis and model creation. If the workflow and dependencies on information sources are clearly documented, researchers may better understand the meaning of the relationships in the network and are better empowered if they wish to reproduce the analyses leading to the network. To achieve these goals, networks stored in NDEx can optionally include a provenance history aspect that can be accessed and managed via the NDEx API.

For example, a network might be derived by an algorithm which finds subnetworks based on experimental data mapped to entities in a reference network; in this case the application performing the analysis should record the analysis event in the provenance history of the output network, including references or descriptions of the algorithm used, the input experimental data, and a description of the input reference network. 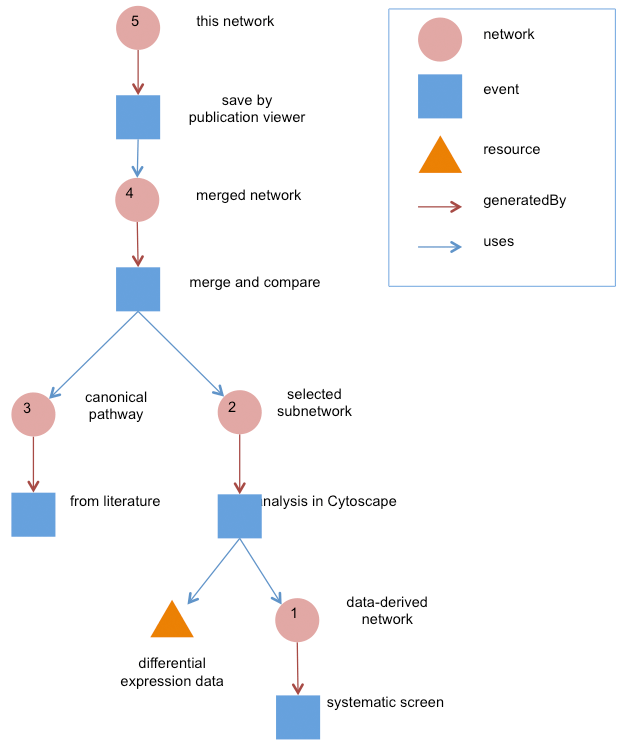 The provenance history can be used to infer network equivalence, whether a given network stored in NDEx has the same content as another network or an external resource. This is valuable since in the general case, computing equivalence by algorithm may be computationally expensive or could require network format-specific knowledge.

Two networks on NDEx servers may be inferred to be equivalent if the following conditions are met:

Similarly, a network may be considered equivalent to an external source in either of the following cases:

Records the added namespace name and value as an event property.

Records filename as an event property.

Network Updates that do NOT Modify Provenance History

The provenance history is NOT updated when:

Any operation that modifies the network, including changes to visibility or provenance also changes the last modification date of the network.

Changes to network membership – what users have access to the network – do not modify the network itself and so do not change either the modification date or provenance history.

The standard fields in ProvenanceEntity and ProvenanceEvent objects correspond to relationships defined in the PROV-O ontology. Other property-value pairs can annotate these objects to provide more information about the entities and events. Any ad hoc pair of strings can be added as a property-value pair, and the properties used may be idiosyncratic to the recorded events and entities. However, the use of properties defined in the Dublin Core (DC) metadata annotations and the Provenance, Authoring and Versioning ontology (PAV) are preferred when applicable..

It is important to note a difference in the use of these ontologies in an NDEx provenance structure and the original intent. A ProvenanceEntity is a description of the referenced object, not the object itself. Therefore, a property such as "dc:title" that is asserted for a ProvenanceEntity refers to the original entity that the ProvenanceEntity represents. The provenance history references ancestor networks and other data sources but can also include self-contained descriptions of those objects that capture their state at the time they were used.

In a copy operation, an application / utility creates a new network (the target) that encodes the same content as an existing network (the source).

The ProvenanceEntity representing the source and all of its prior entities and events are copied from the provenance history of the source.

Upload is a special type of import, where the ProvenanceEntity for the source should store information about the uploaded file in the properties, such as the filename, file type, or data size.

A network created by a query or other operation that retrieves part of the source is a common type of transformation operation. The new network is derived from the source.

In any case where the source network has the same UUID as the target, the ProvenanceEvent is an edit of some type. Because the event can have both startingAt and endingAt properties, the editing process can span an arbitrary amount of time. The application managing the editing process can therefore control the granularity of the provenance history. For example, an editing application could represent a long sequence of edits in a verbose chain of events and intermediate states or it could simply keep updating the endingAt time as the edits continued. In both cases, the resulting provenance history would be a valid representation of the workflow, although one would capture greater detail than the other.

In the case where a utility creates a network that has content equivalent or homologous to the source but described in a different identifier system (such as gene ids replaced with corresponding gene symbols), an additional resource describing the identifier mapping is typically involved. In this case, the mapping resource is also an input to the ProvenanceEvent, and it is appropriate to use the property pav:sourceAccessedAt to describe the relationship.

"Merging" in this context means a modification operation in which the information in network A is augmented by information coming from network B, or where a new network is created from both A and B. This creates a branched provenance history in which the ProvenanceEvent for the merge has two inputs, both network A and network B.